With the Model-2 robot trainer ready, it was time to work with the public schools.  On two Fridays, February 6 and 13, students from Mr. Seldomridge’s class at Granite Falls Middle School came to FCW for a robot build session.

With assistance from Rich, Michelle, Bruce, and Gene, each student assembled a Model-2 robot, which they could then keep.  There were a total of 24 students in the two classes  of two hours, and all were successful builds.  Starting with the “fun” of snapping the servos into the side panels, the students added the tail skid and internal braces, then bolted the chassis together.  They then added the circuit board and assembled the wheel “sandwiches”.  With the addition of the battery pack, they were ready to go.  Many of the students took the robots to the common area for them to roam.  It looked like giant roaches running around as up to ten robots roamed around the room, avoiding obstacles and dancing in sync.  With terms like “awesome” students had a great time with the hands-on experience and left with smiles on their faces.

On Thurdsay, February 12, twelve students from Mr. Bingham’s class at South Caldwell High School also had a robot build session.   The older students needed less assistance, but still had a great time   Mr. Bingham joined his students in building a robot and obtained  additional units for use in class.  These students were given the assignment to develop additional programs for the robot during the remainder of the school session.

FCW is pleased to be able to help the schools with STEM projects and plans additional sessions and projects for the future.  Similar sessions are available to homeschool groups, scout troops, etc. as well.  If you have a group that would be interested in the robots or STEM in general, contact FCW for details. 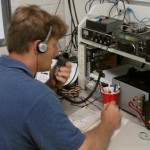 FCW will offer a preparation class for the Technician (entry) level Amateur (Ham) Radio license.  The class will cover FCC rules, station setup and operation, best practices, basic electronics, antennas, and radio theory as required for the Tech exam.  The class will be three consecutive Sunday afternoons, March 1, 8, and 15 from 2-4PM.  The class is free and open to the public.

VE exams for Ham Radio licenses will be held at FCW on Saturday, March 21 at noon.  The class does NOT have to be taken in order to take the exams.  All levels will be tested.  The exams are open to the public and the processing fee is $10.

FCW is pleased to announce the availability of an affordable robot trainer kit.  The Model-2 was designed and fabricated at FCW with the idea of creating an affordable platform for a simple robot and embedded processors.

The Model-2 was created with education in mind and the first run of 50 is being used by Granite Falls Middle School and South Caldwell High School for technical oriented classes.

It includes an example set of programs that allow testing of the platform, a “roaming” function that avoids obstacles, and a sample “dance” to demonstrate swam action using the radio.  It may be programmed using the Arduino tool http://arduino.cc/en/main/software with Windows, Linux, or Mac.

The retail price to the public is $39.95 with substantial discounts available for education.  The project is open hardware and open software.  Full plans will be available on the FCW website soon. Contact FCW for more details.

FCW will hold an introduction to CAD using  Draftsight on Saturday, Feb. 28, 2015 from 11AM until 2PM.  Draftsight is a 2D CAD package produced by Dassault Systemes, the producer of Solid Works.  Draftsight is free to download and use and is available for Windows, Linux, and Macs.

The class will be taught by Ross and will cover the user interface, coordinate system, draw and edit commands, and best practices.  Emphasis will be placed on using CAD to create drawings for CNC applications.

Participants should bring their own computers and have Draftsight already installed.  Draftsight may be downloaded from

http://www.3ds.com/products-services/draftsight-cad-software/free-download/  Registration is required for the free download.  A mouse is highly desired.

The class is free and open to the public.

FCW will be offering a class/workshop in Blender 3D on Sunday, January 4 at 12 noon.  Blender 3d is an free, open source 3d modeling package similar to Maya  and 3d Studio Max.  It can be used for 3d modeling for printing, illustrations, walk-throughs, video and animations.  It includes a physics engine, a gaming engine, and a video effects engine.  More info on Blender 3d can be found at http://www.blender.org/

The class will be instructed by Dave, and will be about 3 hours in length.  This is an introduction class and will cover getting started with Blender 3D:  installing, the user interface, navigation, creating and modifying objects, and using some of the tools included in the package.

Participants should bring their own laptop and should have a keypad and 3 button mouse.  Blender 3d is free and can be downloaded from http://www.blender.org/download/

This class is free and open to the public.

FCW recently acquired some additional space adjacent to the “cave”.    The space consists of two rooms.  One is 20×24 ft and the other 20×20 ft giving a total of 880 sq ft of additional space.  Both rooms are on an outside wall, giving an additional 6 windows for external access.  As seems to be our lot in life, one of the rooms has no power at all and the other has a single circuit that is at least 50 years old.  Also, there is no control over the lights, so one of the first tasks will be to wire the area.

There have been several suggestions as to what to put in the new area including: an extension to the woodshop; the science lab, glass shop and ovens; a prop/costume shop,  a small office; and others.  It will be used for supply and project storage until the wiring and remodeling  occur.

Though visitors are welcome at FCW any time, at the open houses we make special effort to show off the various areas to visitors.  This year, the railroad will be operating, sample projects will be on display, the electronics and K4FCW ham radio station will have activities, and there will be demos of the CNC routers, 3D printer, and laser cutter.

Several items designed and built at FCW will be on sale and there will be special deals for new members. 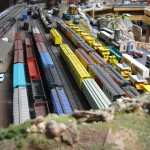 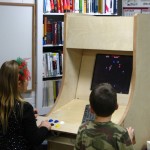 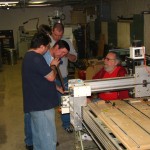 Ham Radio VE exams will be given at FCW at 12 noon on Saturday, November 22. Anyone interested in obtaining or upgrading an Amateur Radio (Ham) license is welcome to attend. Study materials may be found at http://www.qrz.com/ht/

This event is open to anyone wishing to obtain or upgrade an Amateur Radio license. The fee is $10 per attempt and a photo ID is required.

It is that time of year again — days are getting shorter, leaves are turning, and Halloween is around the corner.  FCW’s Horror Master, Ross is at it again and has designed a Fright Night event.

This event will be in the building next to FCW and includes a hayride, dark forest, mad scientist lab, electric chair, haunted room, and a live autopsy, along with other “attractions” design to induce bad dreams.

Fright Night is being done in conjunction with South Caldwell High School Drama Boosters, who are using it as a fund raiser.  The details are:

Earlier in the year, FCW was approached by Caldwell Community College and Technical Institute (CCC&TI) about creating a training workshop for students in their College and Career Readiness (CCR) program.  They had read about the eggbot workshop that FCW created for Granite Falls Middle School and were initially interested in using the eggbots for their needs as well.  After some discussion, it was decided (primarily due to expense) that a better workshop for their needs would be an Introduction to Soldering.  The tentative dates were set for sometime late July or early August.

Soldering irons and simple toolkits were procured from Sparkfun.com and a simple LED blinker was chosen for the project.  On August 4th, 5th, and 6th, a total of 42 students attended the soldering training at FCW.  Rich spent about 40 minutes going over the fundamentals of soldering, the specifics of the board, and component identification.  For the remainder of the two-hour slots, Rich, Michelle, Gene, Colin, and Adam assisted the students in assembling their kits.  Most of the attempts were successful and the students were able to keep their creation.

FCW was happy to work with CCC&TI on this project and is currently designing additional workshops that they may use.  We hope to work with the other local community colleges and public schools to promote interest in STEM (Science, Technology, Engineering, Math) activities.

Donate to help FCW rebuild. Since the fire of July 21, 2017, FCW has a new building and is rapidly rebuilding the project areas.  Donated funds will be used to help renovate the building and add activities.

I you use Amazon, FCW is listed as a charity under smile.amazon.com.  Simply select Foothills Community Workshop as your charity.