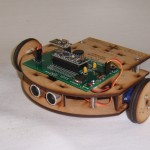 Information for the Model-2 Robot Trainer

Description:  The model-2 is an affordable robot trainer designed for education.

The FCW designed part of the system is Open Source Hardware and Software ( GPL 2 ).  Some of the libraries from third parties may have a different license.

The software system is based on NilRTOS

which is a small real-time operating system for the AVR based arduinos.  Each of the functions needed by the robot ( read button, read sonar, read/write radio,  move, etc.) are implemented as NilRTOS threads.  The version of NilRTOS used for the included software is included in the libraries.

Use as an Arduino Trainer

The Model-2 can be used as an Arduino Trainer by unplugging the servos and radio to free up pins.  Triple headers can be soldered to the pads on the board to allow direct connection to the arduino pins.

Check back periodically for additional software and accessories.