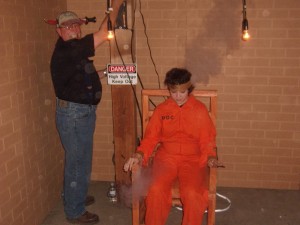 Our biggest project for  2012 was Fright Night, a three night event for Halloween. Ross coordinated the event with he and Rick building many of the props. The building owner allowed us to use a large area behind our space to make a series of fright venues which included a Mad Scientist lab, a Haunted Graveyard, the Dark Forest (complete with werewolf), an Electric Chair, a Guillotine, and an Asylum. Considering that we were pressed for time and had little PR, it went surprisingly well and everyone is looking forward to the next one.

In 2013, the landlord was renting storage in the area for the previous fright night so he offered us another area in the building.  It was a great area, but would require construction of numerous partitions, requiring a great deal of time and resources so Fright Night 2013 was cancelled.  However, FCW is being allowed to use the basement of one of the other buildings this year so we are planning Fright Night 2014.  In addition to the previous venues,  Ross is working on a “live autopsy”, a spider’s lair,  and a haunted living room.  We hope to make this a yearly event.  This event is free for the public to attend.

FCW has an Open House twice per year.  At the open houses, food is available and special effort is made to have all areas active or on display.   The first one in December  2011 was mentioned earlier and went well enough that others were scheduled.  Normally, the open houses were scheduled for Saturdays from 10 AM until 6PM.  In 2013, Friday evenings from 5PM till 9PM were added.

Typically, the common area is set up with the electronics area showing the programmers, PLCs and robot.  After they were completed, the 3D printer and MAME machine were added.  Children, in particular like the MAME machine.   K4FCW is also active with the digital modes being shown on the large TV.

The classroom is the center for food.  We have had hamburgers and hotdogs, ham, chicken, and buffets at different open houses.  This is usually the area in which we get to talk as length with the visitors.

In the model shop, the trains are running and Gene has a “Thomas the Train” that is a hit with the children.  There is also an “observation game” that visitors can do in which they look for various item in the railroad set.  Examples include: a hobo and goat in a boxcar; a plane crash; a boat in danger; building construction sites; and couples making out.  Examples of scenery making are also on display.  When the humidity is correct, Gene has an electrostatic display as well.  Though is has no relationship to the railroad, Gene worked in industry controlling static electricity and has interesting demos.

In the machining areas, the lathe, mill and most of the woodworking machinery are off for safety reasons, but since they became operational, demonstrations are usually done with the CNC routers. Often with items that can be given away.

Since we obtained the laser cutter, it is also demonstrated at the open houses, usually making items that can be given away.  Finally, there are displays set up in the lobby, including blue screen photography and projects such as the electric chair.

The Open Houses have had mixed success, partially dependent on the weather.  At several, we have had several new members join within a month of the open house. 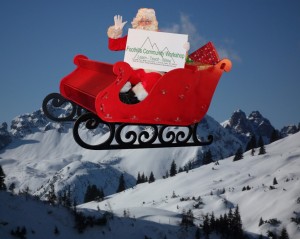 At the 2012 and 2013 Christmas open houses. Warren was Santa and we set up a blue screen with a large sleigh so that kids could have their picture taken with Santa in the sleigh in one of several settings: the North Pole, the Alps, a country road, in orbit, the desert, or on the moon. We had a few families that kicked Santa out and had a family picture in the sleigh.
That went over so well, that the used the Cinderella carriage at the August 2013 open house to allow kids to have a picture with Cinderella (guest Paula) in the Carriage.

Next:  In the Community